Hans Scharoun was born in Bremen in 1893. He spent his childhood in Bremerhaven, a city whose maritime environment clearly left a mark on him. After he graduated from school in 1912, he embarked on architecture studies at Berlin’s Technical University - until he enlisted for war in 1914.

From 1919 on, he worked as a freelance architect in the East Prussian town of Insterburg (today Chernyakhovsk, near Kaliningrad). There, while pursuing architectural competitions, he realized numerous projects such as the Bunte Reihe, known as the Kamswyken settlement. In 1925, he was appointed professor at the Breslau Academy of Arts and Crafts. He became a member of the architectural collective Der Ring in the following year. Until the early 1930s, and in addition to his employment in Breslau, Scharoun shared an architectural practice in Berlin with his colleague Adolf Rading.

Scharoun lost his tenure when the academy was closed in 1932, and he eventually settled in Berlin. Despite being defamed as a degenerate artist, he did not leave Germany after the Nazis came to power. He managed to compensate for the lack of public commissions with private buildings for colleagues and companions from the past. During this time, he built a number of noteworthy detached family homes such as the Potsdam residence for the garden architects Hermann Mattern and Herta Hammerbacher. In 1935, he built a residence for a colleague from Breslau, Oskar Moll, in Berlin-Grunewald. He also finished the house for the Baensch family in Berlin-Spandau that year. In 1937, he created the Möller residence on the banks of lake Zermützelsee in Berlin. However, the Schminke House, whose completion in 1933 likewise fell in line with the rise of the Nazi regime, was an exceptional task for Scharoun. Nowhere else were discussions with the client that intense, shaped by disputes as well as by creative freedom, which was hardly cut back by a tight budget - despite contemporary economic problems.

Upon the end of WWII, Scharoun was appointed to the city building council and named director of the Berlin Department of Building and Municipal Housing. Yet it was only one year later when his position was assumed by Karl Bonatz, and Scharoun became professor for urban design at the Technical University of Berlin. In 1947, Scharoun was named Director of the Institute for Civil Engineering at the newly established Academy of Sciences. He thus became one of the defining urban planners and architects in post-war Berlin. His large apartment buildings can be seen in Berlin’s district Charlottenburg-Nord (1960), in Stuttgart (Romeo and Juliet, high-rises, 1959; Salute, high-rise, 1963) and in Böblingen (Rauher Kapf, residential district, 1965; Orplid, high-rise, 1971).

In addition to his numerous dwellings, he also built two impressive schools in the towns of Lünen and Marl. They followed the basic principle of a ‘school class apartment’, where every class was assigned its own wardrobe, classroom, break room, and protected open-air space. Both schools are still a prime example of a learning environment that caters to the needs of its pupils.

Scharoun set a capstone on his decades-long work in Berlin with his Berliner Philharmonie concert hall and the Staatsbibliothek state library. The city honoured him on 26 February 1969 by conferring him honorary citizenship. Hans Scharoun died in Berlin in 1972; he did not live to see the completion of his state library. During his long career, he put into practice a great number of building projects in the housing and public sector. Nonetheless, it was he himself who said “the house I loved the most was the one the industrialist Schminke had built in Löbau”.
back... 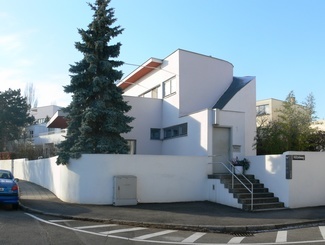 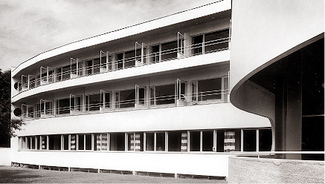 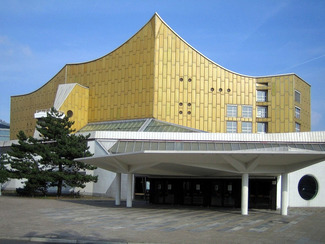