A number of international publications deem the Schminke House to be one of the four most important residential homes of classical modernism in the world. It joins the ranks of Villa Tugendhat in the Czech city of Brno, built by Mies van der Rohe in 1931; Villa Savoye in Poissy near Paris, built by Le Corbusier in 1929; and Fallingwater, the Kaufman Residence in Pennsylvania, USA, built by Frank Lloyd Wright in 1939.

Charlotte and Fritz Schminke had clear requirements towards their future home when they placed the order for its design with Hans Scharoun in 1930. Their idea was a home that would combine living and working. One that reconciled technology with nature and which made a safe, individual and free family life possible. Fritz Schminke’s design specifications for the architect were short and pragmatic: “A modern home for two parents, four children and occasionally one or two guests.” The view into the garden should be unobstructed, and living rooms should have sunlight from the south. It should be easy to care for, since the housewife would be supported in her chores and childcare by one maid only. The floors should be practical, and the baths, wash rooms and bedrooms easy to clean. The maid should have her own living, wash and bathroom. The lady of the house was particularly interested in caring for flowers - these were the requested arrangements.

Upon entering the property, a wide driveway leads to the main entrance with a cantilever roof that, especially when illuminated by night, adds a futuristic touch. It also serves the practical purpose of a rain cover when stepping out of a car. A vestibule leads directly into a central hall that connects all the important rooms: living, sleeping, keeping house. The elongated living room on the ground floor extends into a winter garden in the east. The bank of windows facing the factory to the south answers the call for day-long sunlight. Ceiling-high windows open up the room to the north toward the garden. With its transparency, the house often eliminates the barriers between the inside and the outside. On the ground floor, the residence seems to reach straight into the garden.

Towards the factory, the house appears to be rather conservative and withdrawn: this is where the entrance and housekeeping areas are placed. The first floor is reserved for the bedrooms and accommodation for guests, and it stands in sparse contrast to the ground floor. The bedrooms served as a retreat from the family bustle. The children’s rooms are reduced to a minimum amount of space and remind us of a berth on a ship. The family looked upon their garden as an additional space for living. During the warm season, it naturally added to the living space. It was not out of economic compulsion, but out of conviction that Charlotte Schminke had ordered to build a kitchen-garden, around 11,000 metres square, on an adjacent plot in addition to the flower and recreational garden. This is where we can still see the family’s meadow orchard in its natural state.

Scharoun organized all rooms in the Schminke house with a holistic approach, and designed the lights and the built-in furniture uniformly with an expressive colour scheme. A large part of the authentic colours are now lost, including the originally colourful wallpapers. Today we can only imagine how vibrantly orchestrated the interior once used to be. The Schminke house, however, has always emanated the serenity the commissioning couple and their architect had desired, which the children were also very well aware of.
back... 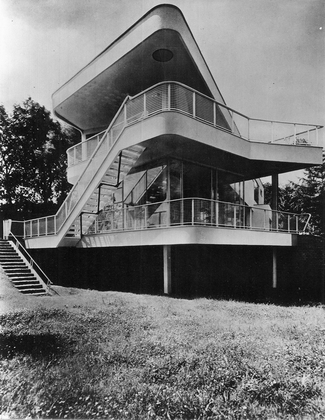 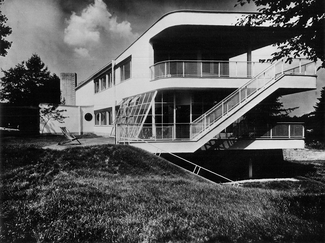 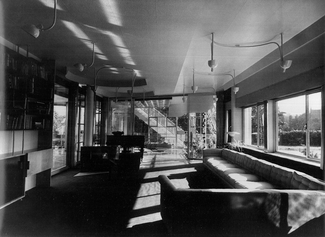