Fritz Schminke, the owner and builder of the house, was born in the West-Saxon town of Glauchau in 1897, where his father Wilhelm was an executive employee in a textile mill. In 1904, Wilhelm Schminke met the Löbau entrepreneur Julius Richter, who was willing to sell his loss-making pasta factory Loeser & Richter. He recognized the potential of selling pasta on the German domestic market, and acquired the property and its production facilities on the street Äußere Bautzner Straße. Wilhelm Schminke had fallen ill in 1918 and could not fully run the factory with his commitment any longer. Being the oldest son, Fritz took over the provisional management of the pasta factory at the age of 21.

Wilhelm died on 28 April 1920, and his wife Anna soon after. Hence, Fritz was only 23 when he had taken on sole responsibility for his father’s enterprise. Two years later, he married his wife Charlotte with whom he moved into his deceased parents’ home - a terraced house on the outskirts of Löbau’s centre. In the following years, the Schminke family grew to four children: Harald (1924), Gertraude (1926), Erika (1929) and eventually Helga (1930). It became clear that the terraced house was going to be too small for the family of six who, however, already owned land that Wilhelm Schminke had acquired in 1910 in close proximity to the pasta factory. The building of an industrialist’s villa, designed by Lossow & Kühne in the contemporary style of the day had already been permitted. Construction was cut short, however, due to a ban on private building during WWI.

At the end of the 1920s, Fritz and Charlotte Schminke began to look for an appropriate architectwho would design their new home. They made their find at the ʻWohnen und Werkraum (WUWA)ʻ building exhibition (Home and Workroom): the largest building, a hostel for singles, was built by Hans Scharoun, then professor at the Breslau Academy of Arts and Crafts. The couple liked its maritime style, and so they commissioned the young architect - which was the outset of a lifelong friendship.

Hans Scharoun visited the family in Löbau repeatedly after the construction had finished in May 1933. The Schminke family itself, alas, was only granted twelve years of living in the house. Following their son Harald’s death in 1943 and Fritz’s captivity as a prisoner of war, the residence was confiscated by the Red Army in 1945, who then used it to accommodate the local Soviet Military Command. The house was returned to the family in mint condition in 1946, although subsequently the Schminkes were ousted from the pasta factory. Charlotte Schminke now ran the house as a holiday home for children from families who suffered from the aftermath of the Dresden bomb raids. Her husband did not return from captivity until 1948.

Fritz Schminke left the GDR in 1950, since he was now considered a war criminal: his company used to supply the Wehrmacht with pasta. His wife followed him to the city of Celle in 1951. After the entire family had moved to West Germany, the Schminke couple leased the house to the city of Löbau who, in May 1951, declared it clubhouse of the socialist youth movement “Free German Youth” (the FDJ). Confiscation of the house followed a year later. In 1963, the clubhouse became a “Pioneer House” (Haus der Pioniere), and it remained as such throughout the Peaceful Revolution in 1989/90.

Hans Scharoun made plans for a new Schminke house in Celle, but they were never put into reality. Fritz’ and Charlotte’s marriage eventually failed and the couple divorced in 1953. Fritz Schminke died in Celle in 1971, his former wife Charlotte in Goslar in 1976. The factory continued to produce pasta under the trade name VEB Anker-Teigwaren. After Germany reunified, the company could no longer cope with the competition on the new market and had to cease its operations as early as 1992. The Schminke daughters waived their right to reverse transfer of ownership on the house in 1993, thus providing the igniting spark for today’s public use.
back... 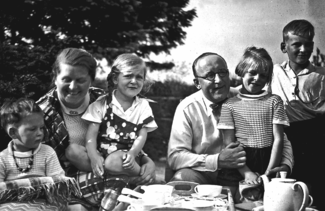 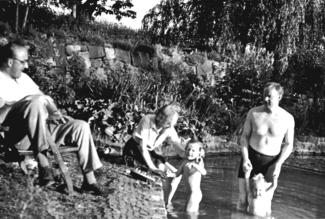 A bath in the pond 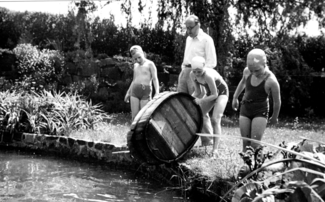